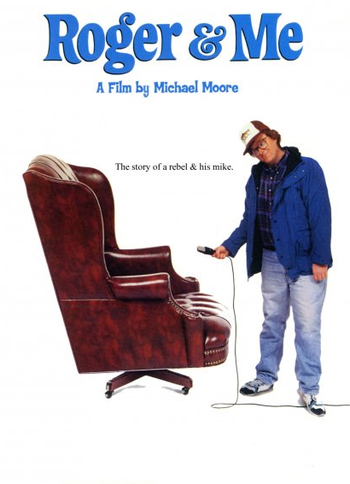 "So this was GM chairman Roger Smith. And he appeared to have a brilliant plan: First, close eleven factories in the U.S., then open eleven in Mexico where you pay the workers seventy cents an hour. Then, use the money you've saved by building cars in Mexico to take over other companies, preferably high-tech firms and weapons manufacturers. Next, tell the union you're broke and they happily agree to give back a couple billion dollars in wage cuts. You then take that money from the workers, and eliminate their jobs by building more foreign factories. Roger Smith was a true genius."
— Michael Moore
Advertisement:

Moore shows the deterioration of his hometown of Flint, Michigan, following the mass shutdowns of the General Motors factories to which it was home, and his own attempts to track down Roger Bonham Smith, General Motors CEO, and bring him to Flint to see the closures' impacts firsthand. While its accuracy is disputed, the film became legend for its acerbic, poetic attacks on downsizing.

The film was the highest-grossing non-concert documentary of all time upon its release (Moore's later films Bowling for Columbine and Fahrenheit 9/11, among others, have since out-grossed it), earned the coveted 100% rating on Rotten Tomatoes, and won an Emmy.