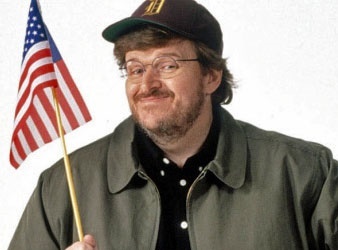 "We like non-fiction and we live in fictitious times. We live in the time where we have fictitious election results that elects a fictitious President. We — We live in a time where we have a man sending us to war for fictitious reasons. Whether it's the fictition of duct tape or the fictitious [sic] of orange alerts, we are against this war, Mr. Bush. Shame on you, Mr. Bush, shame on you. And any time you've got The Pope and the Dixie Chicks against you, your time is up."
— Michael Moore, winning the Academy Award for Bowling for Columbine
Advertisement:

Michael Francis Moore (born April 23, 1954) is an American filmmaker and author known for his stridently left-wing political opinions, which he uses his documentary films to advocate. He is very controversial for this reason. Nonetheless, no fewer than three of his films have at one time or another held world records as "highest-grossing documentary not concerning music" and he has also received significant critical acclaim for them.

Tropes relevant to Moore and/or his work: