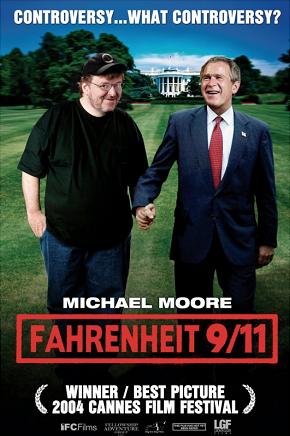 Fahrenheit 9/11 is a controversial 2004 documentary film created by Michael Moore.

The film takes a critical stance against the George W. Bush administration and the way in which it handled The War on Terror, in particular the fall-out of the September 11, 2001 terrorist attacks and the later Invasion of Iraq by an American-led coalition in 2003.

The highest-grossing documentary film of all time. Ruled ineligible for an Oscar for Best Documentary Feature after it was aired on television shortly before the 2004 presidential election.