The Man Is Sticking It to the Man 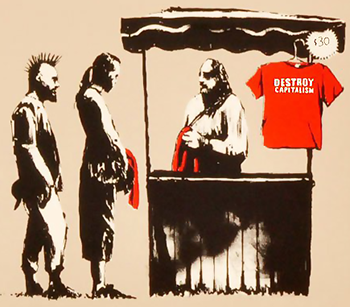 Destroying capitalism, one overpriced, sweatshop-manufactured T-shirt at a time.
Hobbes: So basically, this maverick is urging people to express their individuality through conformity in brand-name selection?
Calvin: Well, it sounded more defiant the way he said it.
— Calvin and Hobbes
Advertisement:

When a large commercial corporation tells you via commercial that the best way to rebel against corporate social assimilation is to buy their products. Will often involve what Lindsay Naegle of The Simpsons refers to as a "spokesrebel". Also can refer to any commercial that attacks its general field, but claims they are rooting for the underdog, and are taking a stand against the greed of all the others. So give them your money. See: Lawyers, car salesmen, phone providers, etc. There is Conspicuous Consumption at work here.

The concept was popularized by the economist Joseph Schumpeternote  based on theories by Karl Marx which have been unironically adopted by Wall Street as good business advice as "creative destruction". The basic principle is that, in an economy with a finite amount of wealth, entrepreneurs and companies are incentivized to come up with ways to devalue the wealth controlled by "the establishment" and claim it for themselves, forcing the establishment to either evolve or collapse into bankruptcy. Often, this creative destruction takes the form of new technologies and more efficient production processes (like streaming services and ride-sharing apps putting video rental stores and traditional taxicabs out of business), but it can also include seizing on social trends and moral crusades (such as attacking companies over human rights or environmental issues to position their own product as the "moral/green alternative"). In Schumpeter's view, capitalism is not just a static, monolithic bloc of monopolies but an endless churn of businesses and entrepreneurs attacking and destroying the wealth of the old guard, rising in triumph to become the new old guard, and then being destroyed by the new new guard when their time is up.

Since the free market is a vast array of agents acting individually, the hypothetical singular "The Man", when used as the face of capitalist excess, has become associated with two competing functions. The Man is seen as a representative of censorship and regulation, yet The Man also favors demolishing censorship and regulation in order to pursue profit at the cost of altruism. So a company which manufactures edgy, offensive content will call on people to "stand up" against censorship groups as some kind of cry for freedom, yet the ultimate goal is to make more profit for themselves. They may also be driven to respond to changes in society and tensions of its time and appeal to the needs and sensibilities of the public, even if they themselves don't share the same inclinations or if the public sentiment is being manipulated by yet another business angling to make money. The main concern of any business is self-preservation, and changing with the times is a historically proven method.

The antithesis of the Bandwagon Technique, and often used by competitors of companies that can use said technique. Tends to invoke the Rule-Abiding Rebel, since by nature they're telling you to rebel by joining a status quo. Hipsters are known to fall for this sort of trick.

Stealth Cigarette Commercial is a specific instance where tobacco companies are required by law to make anti-smoking Public Service Announcements. Rather predictably, the resulting PSAs tend to be along the lines of Do Not Do This Cool Thing.

The commercial may refer specifically to "The Man". A type of Straw Hypocrite. Compare We Don't Suck Anymore and Biting-the-Hand Humor. See also Disobey This Message.

Sticking It To Yourself

In an advertisement for Sprint, a corporate CEO explains how he's using the new Sprint phone plan, that it's his way of "sticking it to the man." His employee points out that he is "the man," so this means that he's sticking it to himself. "Maybe," agrees the CEO.

Sticking It To Yourself

In an advertisement for Sprint, a corporate CEO explains how he's using the new Sprint phone plan, that it's his way of "sticking it to the man." His employee points out that he is "the man," so this means that he's sticking it to himself. "Maybe," agrees the CEO.