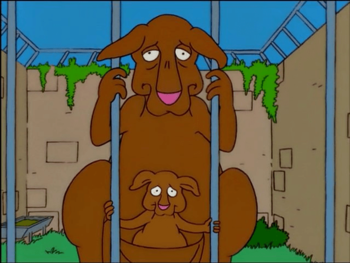 Calvin: Mom wants to know if we'd like to go to the zoo today.
Hobbes: Can we tour a prison afterwards?
— Calvin and Hobbes
Advertisement:

In Real Life, zoos have changed a lot throughout time. In the 1800s to early 1900s, they were originally just harsh concrete cages. As time went by and regulations and concerns for animal welfare were established, zoos started to improve more and more, especially after the concept of endangered species appeared, when zoos gained an extra role to play: preserving animal species and breeding them in captivity. Now the US, Canada, and European countries have strict regulations on exhibits and must meet certain standards that give animals large, roomy enclosures made to resemble their natural habitat.

However, in a lot of media, zoos are shown as gloomy, maudlin places. Whilst the keeper(s) are generally portrayed sympathetically, the zoo authorities either care very little for the animals, or care but do not know anything about them. The exhibits are severely undersized, inadequate or simply falling apart and the animals escaping frequently. Visitors either come in order to make fun of the animals and throw stuff at them, or the zoo has hardly any visitors.

Often a character will comment on the poor conditions of the zoo, and sometimes it becomes a plot point. Generally, the story ends with either the animals being transferred to a location more conducive to their needs, be it another institution or "the wild", or the protagonists helping to improve conditions at the zoo.

In period settings, the protagonists may view the conditions as perfectly acceptable (or even revolutionary) and/or the care of the animals is based on outdated knowledge.

Zoos are portrayed, generally, far less negatively than circuses; the animals are rarely deliberately neglected or mistreated and the keepers in such settings are very rarely portrayed as abusive or even malicious — they'll be either well-intentioned, but lacking in knowledge, or simply struggling to provide adequate care but suffering under incompetent/greedy superiors.

If the animals escape from the zoo, expect an Escaped Animal Rampage.

Tropes Are Flexible, so this trope could apply to any collection of exotic animals under human "care" — barring, of course, a circus, which is already covered under the "animal abuse" variant of the sister trope Circus of Fear.

For example, the zoo doesn't have to be public. This trope could include the evil aristocrat's private collection of exotic animals (whether real species, prehistoric ones or fictional creatures), who are neglected, abused (by their owner or his hired thugs) and only viewed as objects/curiosities and/or the occasional Shark Pool (for carnivorous species).

A Sister Trope to Pounds Are Animal Prisons. Compare Bad People Abuse Animals, in that zoos that treat their animals badly often indicate the character of the people who run them. See also Free the Frogs and Hilarity in Zoos.

Debate about whether zoos, regardless of intentions and quality, are ethical or not is still common today. While very inadequate zoos do exist, posting real life examples will just trigger endless flame wars over animal rights and welfare, so No Real Life Examples, Please!