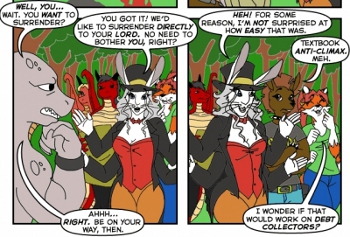 Outwitting Mooks is all in a days' work for our heroes...
Advertisement:

A Furry Comic focusing on a trio of women who try to balance their domestic issues and their goals in life. Oh yeah, and they’re also secretly four-armed magic users from another world. Don’t tell their husbands!

A comedy-fantasy about three furries who combat magical threats to their adopted homeworld Earth, when they’re not passing off as mortals. Investigating a pending magical invasion of Earth, the main characters deal with pressure from their families to keep their status quiet, making alliances with other do-gooders and trying to keep from going crazy due to bad pop culture.