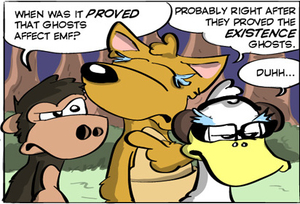 is a webcomic by Jeffrey Watson that has been running from July 2008. The three main characters of the strip are Toby, a skeptical atheist ape; Pastor Bear, a fundamentalist and creationist Christian bear; and Wilbur, a dog who swears by alternative medicine and is an environmentalist.

Later, more characters are added: H.R., a confidence trickster who is a mongoose; Thomas, a religious moderate tortoise; Arlen, a pika who is also a paranoid Conspiracy Theorist; Piggy McCarthy, a pig who believes vaccines are dangerous; Clemens, a Hollywood Atheist who treats "every religious claim as a scientific one", and Dee-Quack Chopra, a duck version of Deepak Chopra.

The strip doesn't pull punches when criticising people's beliefs and is written from a clearly atheist and skeptical perspective.