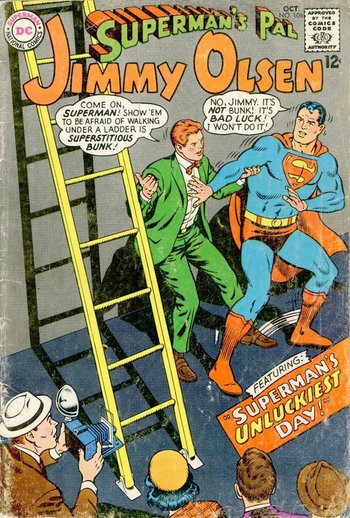 The Superstition Episode is centered around some sort of unlucky superstition or superstitions. Maybe it's Friday the Thirteenth. Maybe a character accidentally breaks a mirror and freaks out about the seven years of bad luck that they’re sure will follow. Maybe a skeptical character pets a black cat or walks under a ladder to prove such silly superstitions aren't true. In any case, that character will be plagued by bad luck for the rest of the episode. The character may insist their extreme bad luck is merely a coincidence, or they may be superstitious from the start. Either way, there may be another character who disagrees, and debates with them about the validity of superstitions.

If the worst comes to the worst, their bad luck will spread to their friends. Then their superstitious friends may try to avoid them or they will try to avoid their friends so they won‘t catch their bad luck. At the end of the episode something will happen that convinces the character they never were or are no longer jinxed, and the bad luck will never come up again.

Though the bad luck often is treated as "real", subversions that attribute it to a mundane cause are common. If the characters have no way to tell if the it's a coincidence or not, the bad luck may be interpreted as Maybe Magic, Maybe Mundane.

The episode often mentions other unlucky superstitions or good luck charms such as the Four-Leaf Clover or Lucky Rabbit's Foot. May be started by a Bad Luck Charm.

If a character just happens to be unlucky for an episode, that's not this trope. Neither is Not My Lucky Day, for when a character just misses extreme good fortune, though they may overlap. For it to be a Superstition Episode, the bad luck has to be remarked upon and attributed to some sort of superstition. For characters who are chronically unlucky, see Born Unlucky. Supertrope to Chain Letter.

Percy has a lot of unlucky encounters throughout his day.

Percy has a lot of unlucky encounters throughout his day.