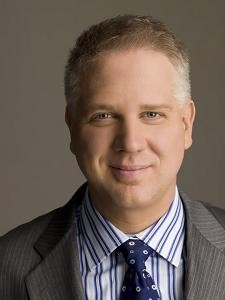 "Only in his wildest dreams could an actual suicide bomber hope to do as much damage to this country."
— Keith Olbermann, as quoted on the back of Glenn Beck's book, Arguing with Idiots

Glenn Lee Beck (born February 10, 1964) is a political pundit/talk-show host. His status as a political talking head has made him a strong magnet to controversy, but his ardent right-libertarian viewpoints set some people's teeth on edge. Probably best known for flowcharts, mobilizing the "9/12" sub-movement within the Tea Party, crying for his country on-air almost regularly (not really Once per Episode, but often enough for his detractors) and his over-the-top antics. He aligned himself with the Tea Party political movement in its infancy and spends hundreds of hours over each year talking about current events.

His career began with The Glenn Beck Radio Program, in 2000. He became nationally syndicated two years later, and continues the radio program. The success of the radio program encouraged him to move to television, creating The Glenn Beck Program on CNN. He then Channel Hoppped twice: first to Fox News Channel in 2009, and then to TheBlaze (a channel he creates and maintains) in 2011.

Not to be confused, if such a thing were even possible, with Beck.