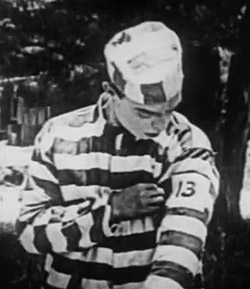 "Florida is 13th in education, 13th in tourism, 13th in cleanliness. It is the worst state in the union."
— Creed Bratton, The Office (US)
Advertisement:

Similar to how Four Is Death and 108 is Mystical, the number thirteen is often considered an unlucky number in the western world.

There is some debate over the source of fear towards the number thirteen, though the writer Nathaniel Lachenmeyer has argued that the original 'unlucky thirteen' superstition was the 19th century belief that if thirteen people sat at a dinner table one would die before the end of the year. (Presumably he hadn't read the Greek myth using the trope.) Certainly it was established by the early 20th century when the word triskaidekaphobia was coined to describe an irrational fear of the number thirteen, a fear which has become so prevalent that many buildings in America will not have a 13th floor. If it is not particularly subtle it's the writers beating you over the head with symbolism.

Some will cite thirteen as being the number of Judas Iscariot, one of the Twelve Disciples of Jesus in The Bible and the one who betrayed him, leading to his death on a Friday (he was replaced by Matthias; who became the new 12th Disciple, thus making Judas number 13).

Another myth was that Loki, the Norse god of trickery who betrayed all the others, was the 13th of the Aesir (battle gods). Friday the 13th was unlucky because Friday means "Freyja's Day", and Freyja (the goddess of love [and war and death]) was known to be hot-tempered and had a grudge against Loki. Another story says that The Knights Templar were wiped out on a Friday the 13th.

Often writers will associate someone or something to the number thirteen to show that they are dark, evil, unnatural, or just unlucky. Maybe the Butt-Monkey or the Cosmic Plaything was born on the 13th.

Friday the 13th is believed to be a particularly unlucky day, and has even spawned a movie franchise. Weirdly the idea that Friday the 13th is especially unlucky apparently appeared relatively late — in the 19th century both thirteen and Friday were separately unlucky (compare this to the Spanish-speaking countries, where the especially unlucky day is Tuesday the 13th, combining the previously existing independent superstitions about the number 13 itself and the medieval-Spain one about Tuesday).

Another theory about the miasma attached to 13 places its roots in numerology. Twelve is a multiple of several important numbers — two, three, and four (six only having significance as two times three). The number thirteen, however, is prime. A number with no connections at all after such a divisible one? That couldn't have been good!

And a last especially crazy theory (google if you believe noone could come up with that): You know what happens 13 times in a year?

Note: This is not a repository for every time the number thirteen just happened to appear in history (Apollo XIII and the thirteen stripes on the United States flag being the best examples), this is for when writers use the number thirteen to denote something bad, or just really unusual.

Wally and Dokko see a number 13 on Chiko's bike. They know it will end badly.

Wally and Dokko see a number 13 on Chiko's bike. They know it will end badly.