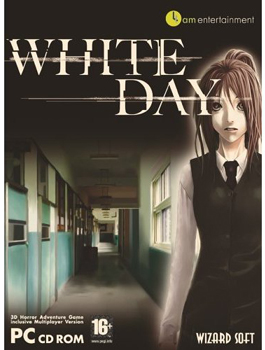 White Day: A Labyrinth Named School is a Korean Survival Horror game by Sonnori and distributed by Wizard Soft that tells a story of a young man's trip into school in the dead of night to deliver some candy in preparation for the Eastern holiday of the same name (similar to Valentine's Day in Western countries) to So-yeong, the archetypical Shrinking Violet target of affection.
Advertisement:

It doesn't take long for the place to go from moody and dark into a full-blown nightmare as parts of the school begin to grow dilapidated, an insane janitor goes to town on a seemingly random student before he starts coming for you, and two girls that seem pretty unfazed about the school turning into a hellish nightmare. And everything goes downhill from there...

The game was released in Korea for PC in 2001 with an English European release planned by the UK-based 4AM Entertainment in 2004 (even including translated screens from the import game), but it was unfortunately cancelled. In the same year of cancelled localization, the game was re-released with six other games developed by Sonnorinote (the other games are Astonishia Story, Darkside Story, Forgotten Saga, Steel Empire, Arcturus, and Astonishia Story R) during their 10th anniversary in the Romance of Package compilation. The game was quite notable for several patches on the creator's site made to tone down the creepiness factor due to complaints from people being too terrified to finish the game and locked the real horrors away in the harder difficulties. It was later released on mobile phones in 2009 but sacrificed the 3D graphics for still images that hampered the atmosphere of the game.

Since the cancellation of the localization and Sonnori closing up shop, the original game itself had become something of a rarity with a few people seeding torrents and file downloads in an attempt to keep a copy available. Unnamed Studios has been working on a fan-made translation/restoration project that translates the game and fixes the compatibility issues so it can be played on non-Korean PCs.

The game's graphics did not age well, but its place was between Clock Tower's 2D interpretation of the helpless victim and Resident Evil's 3D depiction of Badass Normal if it was a game using a first-person perspective that took functionally of a defenseless protagonist and pitted him against a haunted building with a stalker...

While regarded by many as a cult classic, the game had been seen by many as not having a chance of a sequel or re-release... However, in early 2016, it was announced it would be re-released for the PlayStation 4, made to be used with its new VR technology, and completely redone from the ground up. An Android and iOS version of the remake has been released overseas in April 2016 under the title The School: White Day, with a PC version that was quickly greenlit for Steam and was finally released on August 22, 2017 and can be purchased here

. It was also released for PS4 the same month.

A VR game called White Day The Courage Test was developed for theme parks in 2018 before being released for home devices in 2020, in time for Halloween.

Warning! Due to the nature of this game, it is best not to read any further past this point since the game can be a minefield of spoilers, despite the amount of spoilers covered up on this page.