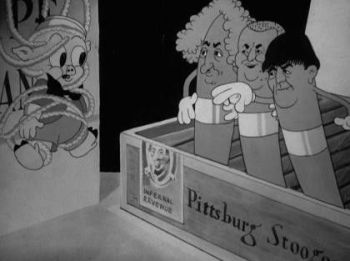 While walking to church on a Sunday morning, Porky, depicted as a child in this cartoon, is tempted to take up smoking by a street kid who takes Porky up on his nickelnote the same nickel Porky's mom gave him to put in the collection plate bet that he can do cigar tricks. When Porky ends up failing at them in spectacular fashion, he gets light-headed, stumbles into a closed tobacco store, and meets Nick O'Teen, a cloud monster who forces Porky to have all the smoking he can handle.

Needless to say, this cartoon drops a necessary anvil in regards to tobacco usage.