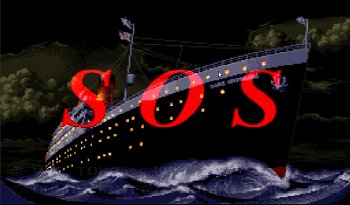 It's true! They do send out an SOS.
This is to be the largest passenger shipwreck to date.
There are a reported 2300 passengers aboard. The voyage will turn from ecstasy to catastrophy.
The ship is in total chaos. Passengers and crew alike begin to panic, as they near the grip of death.
Now, the real tragedy begins...
Advertisement:

SOS, known in Japan as Septentrion (セプテントリオン), is Cinematic Platform Adventure Game for the Super Nintendo Entertainment System developed by Human Entertainment and released in 1993. Known as Septentrion in Japan, the U.S. version was released by Vic Tokai. Basically take The Poseidon Adventure and turn it into a side-scrolling platformer and this is what you'll end up with. The Lady Crithania capsizes during a storm and it's up to you to escape with your life. Along the way you will encounter other passengers and crew who you must try to rescue... or not. You have to escape within one real life hour or it's game over.

You play as one of four adult males trying to escape. Each character starts in a different part of the ship, and must rescue a certain person or people to get their good ending. Depending on your character's personality, passengers may come with you right away or refuse to come along at all; you must balance time spent rescuing people with time spent escaping. In general, the more people rescued, the better the ending. With the exception of drowning, the only penalty for getting hurt is to lose five minutes from your remaining escape time, which is also the only time you get to see how much time you have left.

If all this sounds familiar, games such as Dead Rising, Breath of Fire: Dragon Quarter, and Lightning Returns: Final Fantasy XIII draw heavy inspiration from this game and expand on its ideas. The most apparent is that losing the game or getting a bad ending is entirely possible and all too easy. However, this allows players to replay the game with more information than you had before and can lead to better playthroughs and endings, where the meat of SOS's depth lies.

The game was hardly advertised at the time and not very popular. However, it's a very innovative spin on the Survival Horror genre, especially for its time, and is worth a look at at the very least. There's also a Japan-only sequel, Septentrion: Out of the Blue, released in 1999 for the PlayStation, but wasn't as well received due to the lack of the mechanics that made SOS stand out and throwing in a conspiracy into the mix.