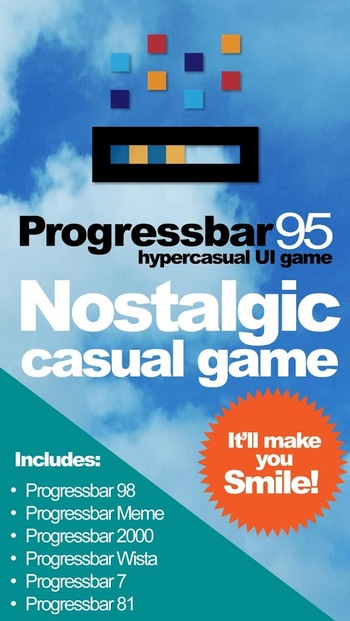 That's less than a half of operating systems offered.
Welcome to Progressbar setup!
Congratulations on your choice of new version of Progressbar!
Setup will take anywhere from 5 to 10 seconds
Advertisement:

Progressbar 95 is a mobile video game by Spooky House Studios released in 2019 with a PC version released in 2020. In it, you use Progressbar OS (a parody of Microsoft Windows) control a progress bar and collect blue segments to fill it up. Filling the bar to 100% finishes the level. However, there are many obstacles like pop-ups or explosive red bars that appear and can be distruptive or even cause you to lose a life. Clearing levels earns you points, which are then used to upgrade hardware, eventually allowing you to install new operating systems (the old ones remain playable). After beating enough levels, you can unlock wallpapers for your phone and special titles for the systems, starting with Professional and advancing from there.

You can also play special modes if you get tired of just collecting dropped segments, which include the following:

PB-DOS Shell has two exclusive modes instead of the three aformentioned ones, Progresstrix is a Tetris clone in which blocks of four to seven segments fall and you must fill one line with progress to win, and Progress Commander in which you must tap the right arrow button to move the correct words falling through the left column representing colors ("BLUE" is good and "RED" is bad, for example) so they fill the right column.

Near the end of 2020, the BarOS software line for Progresh hardware, based on Apple Macintosh, was introduced. Bar Systems feature different types of gameplay than just moving the progressbar around. They run on a different computer with its own hardware as well and have a character based on Happy Mac.