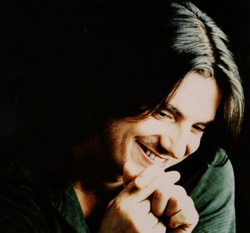 "I'm tired of following my dreams! I'm just going to ask them where they're going and hook up with them later."

Mitchell Lee Hedberg (February 24, 1968 — March 30, 2005) was an American stand-up comedian who used a lot of one-liners, like Steven Wright with a more laid back delivery. He was known for his monotone voice and rose-colored aviator glasses. He specialized in wordplay, non-sequiturs, and observational comedy. He made a few appearances on a handful of TV shows and did some voice work for Home Movies.

Hedberg was an admitted drug user, and occasionally made jokes about his drug use in his act. These jokes became Funny Aneurysm Moments when Hedberg died in 2005, supposedly by overdosing on heroin and cocaine. What makes it sadder is that this was before doing his first HBO special. This makes him the third comedian in a row to die in the middle of a decade in their thirties. Andy Kaufman died of cancer in the 1980s and Bill Hicks died from the same in the 1990s. Time will only tell if this trend will follow.