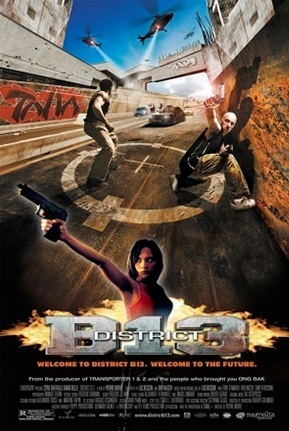 You took some wrong directions, friend. This ain't Monaco. It's Baghdad!
— Gangster
Advertisement:

In the near future, the worst ghettos (banlieues) of Paris are literally walled off. Banlieue 13, one of the worst of them, is run by the ruthless crime lord Taha. After Leito, the hero of the story, steals and destroys a shipment of Taha's drugs, Taha retaliates by kidnapping Leito's sister Lola. Leito rescues her, but is arrested by corrupt cops, who surrender his sister to Taha and his gang. Leito murders the police captain in retaliation, and is imprisoned.

Six months later, an undercover supercop named Damien is given an urgent mission: Taha has stolen a Neutron Bomb which has an automatic timer function engaged and set to detonate in less than 24 hours. Now with time running out, Damien is ordered to befriend Leito as a guide into the ghetto, which has degraded to an outright war zone in the police's absence. Though unwilling to trust him, Leito agrees to help Damien find and stop the bomb, but there's far more to this crisis than either of them know.

Features David Belle showcasing Le Parkour back before it was very well known in the English-speaking world. Dubbed into English as District 13 or District B13. A sequel, Banlieue 13: Ultimatum was released in 2009.

An English-language remake of this film, Brick Mansions, was released in North America on April 25, 2014, and in its native France two days earlier. It once again stars David Belle, this time sharing protagonist duties with Paul Walker in his last completed role before his death.