Film / Lady in the Water 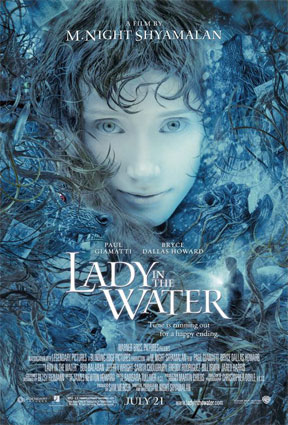 Time is running out for a happy ending.

M. Night Shyamalan wrote, directed, and acted in this "grown-up bedtime story" about a Philadelphia apartment building superintendent named Cleveland (Paul Giamatti) who discovers a magical sea nymph named Story (Bryce Dallas Howard) who's been transported to this world and is living in the building's own swimming pool.

As this bizarre revelation sinks in, Cleveland becomes enraptured by her otherworldly charm. As he shelters her in his apartment, other inhabitants of the building begin falling into place as representations of characters from an Eastern myth in which these mermaids, or "narfs," coexist unhappily with more beastly and violent characters.

In human reality, the forces of darkness that threaten the heroes of a fairy tale prove to be much more terrifying, and the victory of good over evil is by no means guaranteed. Jeffery Wright, Jared Harris, and Mary Beth Hurt co-star, as well as Shyamalan himself, playing the visionary writer Vick.

Lady in the Water contains examples of: