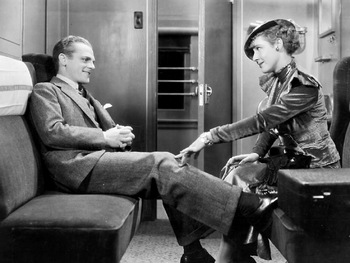 Dan Quigley (James Cagney) is James Cagney in a 1930s movie—namely, a rambunctious tough guy. He falls in with a gang of con artists led by a fellow named Duke (Leslie Fenton). Dan's criminal talents soon make him leader of the gang. Together they start a nightclub which provides cover for their main business of robbing rich folks. Meanwhile, Dan falls in love with the only female member of the gang, Myra (Mae Clarke).

The joys of robbing the 1% turn sour when one of Dan's fellow thieves kills a servant during the course of a robbery. Dan and the gang light out for California, but when Dan is arrested at the train station, Duke persuades Myra to ditch Dan and run away with Duke and the bankroll. Dan is left broke and alone in Los Angeles, until he gets a job...as a film extra. He then proceeds to become a movie star, which lands him a new girlfriend, lovely actress Lois Underwood (Margaret Lindsay). Things are going quite well for Dan until Duke, Myra, and the gang show back up, wanting their cut.