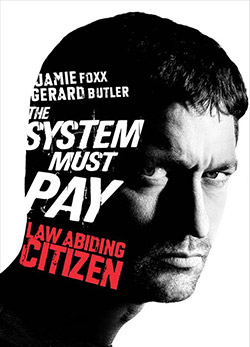 Law Abiding Citizen is a 2009 crime film directed by F. Gary Gray and starring Gerard Butler and Jamie Foxx as people on opposing sides of a justice system gone wrong.

Clyde Shelton (Butler), a talented engineer and family man, watches his life fall apart before his eyes when thugs Clarence Darby (Christian Stolte) and Rupert Ames (Josh Stewart) break into his house, which results in the death of his wife and child right in front of him. Prosecutor Nick Rice (Foxx) only has circumstantial evidence on Darby, who committed the murders, so, in order to maintain his high conviction rate, Rice gives Darby a sweet plea bargain in exchange for testimony against the less-guilty Ames (who receives the death penalty) – against Clyde's wishes.

Ten years later, Ames's execution goes awry and the police find Darby dead. Rice has Shelton arrested for the acts, and Shelton appears interested in a plea bargain of his own. After he turns down a deal, however, Shelton initiates a plan designed to bring down Rice, his fellow prosecutors, and the justice system itself. As the dominoes start falling, Rice wants to find out how Shelton keeps pulling off his plan...