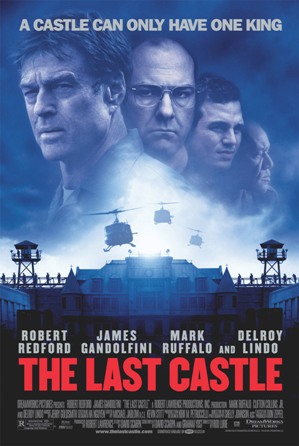 The Last Castle is a 2001 action-drama film directed by Rod Lurie (the guy that did The Contender), starring Robert Redford, James Gandolfini, Mark Ruffalo, and Delroy Lindo.

Eugene Irwin (Redford), a highly decorated U.S. Army Lieutenant General, is court-martialed. He is sent to a maximum security military prison, run by iron-fisted warden Colonel Winter (Gandolfini). Should one of the prisoners piss Winter off, say by saluting a prisoner who is of a higher rank than them (which is not allowed), he subjects them to abusive treatment, such as shooting them in the head with a rubber bullet. This has resulted in the deaths of several of the prisoners. Eugene is disgusted and the other prisoners are aware of Eugene's legendary prowess and look up to him with significant reverence, so he organizes the prisoners into a makeshift army. They plan to wrest the prison from Winter's control from within so that he will be removed as warden...

The film was shot at 103-year-old former Tennessee State Prison in Nashville, the same prison The Green Mile was filmed at.