Film / Leave Her to Heaven 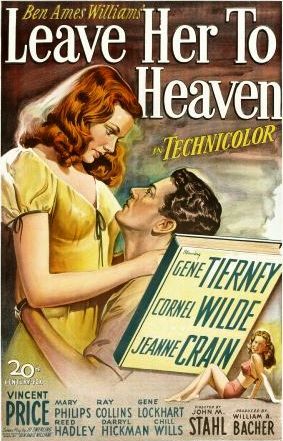 Mrs. Berent: "There's nothing wrong with Ellen. It's just that she loves too much."
Advertisement:

Richard Harland (Wilde) is a writer who meets socialite Ellen Berent (Tierney) on a train to New Mexico. As it happens, they're both going to the same person's house; Richard to take a break from his forthcoming novel, and Ellen, who's with her mother (Mary Philips) and cousin Ruth (Crain), to scatter the ashes of her late father. They fall in love, and despite the fact Ellen is engaged to Russell (Price), a prosecutor, she breaks off the engagement with him and marries Richard. However, it turns out she doesn't want to share him with anyone else, including her mother, Ruth, or Richard's brother Danny (Darryl Hickman), a cripple. And Richard eventually grows to realize just how obsessive she is.

, with Patrick Duffy as Richard and Loni Anderson as Ellen.