Do You Trust Me? 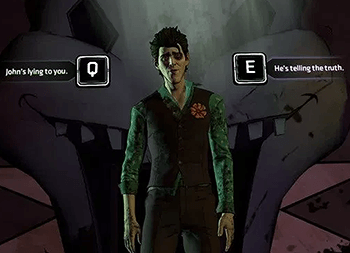 Now how could you not trust a face like that?
Vito Corleone: Do you have faith in my judgement?
Clemenza: Yes.
Vito: Do I have your loyalty?
Clemenza: Yes, always Godfather.
Vito: Then be a friend to Michael. Do as he says.
— The Godfather
Advertisement:

A Stock Phrase usually used by characters believing in The Power of Trust or The Power of Friendship to save the day.

This usually goes down one of two ways. In the first, Bob and Alice are in danger. Bob has a plan but needs Alice to trust him in order for it to work. Perhaps she needs to jump a ravine and trust that he will catch her. Or perhaps he needs her to act as a distraction for the Big Bad and trust that he will take the Big Bad down before she's in serious trouble. He will ask, "Do you trust me?" and if she says yes she will immediately need to prove her trust.

The second scenario is usually romantic with little to no real danger involved. Alice may be a little nervous about something, and Bob uses the question to reassure her. She may be wary of stepping out on a high balcony to look at the view or dancing in front of other people. The question may also be asked before Their First Time. Be careful though, if the wording is "Don't you trust me?", especially in a slightly pleading tone, it may be a sign that the person is at the best Not Himself and at the worst The Casanova or The Vamp. That little apostrophe can make a lot of difference.

Common subversions will often either have Bob miss or Alice say that, no, she doesn't trust him. Sometimes they'll do it anyway.

This trope is about the truster confirming their faith in the trusted. Compare Remember That You Trust Me where the trusted reaffirms the faith of the truster.