Series / The Sinking of the Laconia 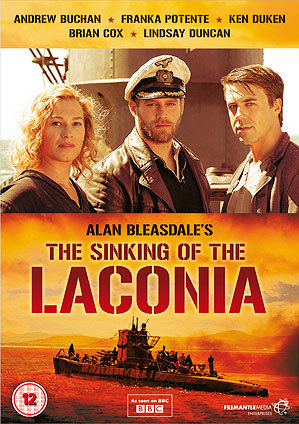 Two-part 2011 miniseries which originally aired on the Beeb depicting the Real Life events surrounding the sinking of HMS Laconia by a U-boat in September 1942, and the subsequent rescue of the survivors by the crew of the submarine. A British-German co-production of the BBC and ARD, it was directed by German Uwe Jansen and written by British Alan Bleasdale.

During its dangerous voyage from Egypt to Britain, the eponymous ship, carrying mainly Italian POWs and a large number of British civilians, is attacked and sunk by U-156, under the command of Kapitän Werner Hartenstein, setting off a chaotic, desperate struggle to escape the wreck onto the few lifeboats. The German mariners surface to search for potential captives, but are shocked to find not only soldiers, but huddled groups of civilians, including women and children, among the survivors. And so, Hartenstein orders the rescue of as many drifters as possible, until British sailors and civilians, as well as several Italians, fill up the U-boat and makeshift convoy of lifeboats tied alongside.

Then things get complicated.

While Hartenstein is determined to deliver his unlikely guests, he finds it increasingly difficult to balance the safety of his own men against that of a group of enemy civilians.