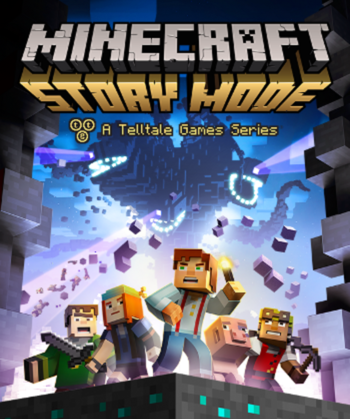 is an episodic Point-and-Click Game created by Telltale Games with help from Mojang. It is based on Mojang's game Minecraft.
Advertisement:

The game puts you in the role of Jesse, a semi-customizable protagonist, as they set off on an adventure to save the world by reuniting the Order of the Stone, a group of legendary adventurers.

The game is divided in 8 episodes.

The game was released on PlayStation 3, PlayStation 4, Xbox 360, Xbox One, Microsoft Windows, OS X, iOS, Android, Wii U , PS Vita, and Nintendo Switch. A simplified version of the first five episodes was released on Netflix on November 27, 2018, reworking the series into a Gamebook-style narrative controlled by the viewer using their remote.

A second season was fully released with 5 episodes:

Due to the shutdown of Telltale Games, sales of Minecraft: Story Mode have been discontinued, and all official support for the game ended on June 25, 2019. The first five episodes are still on Netflix, however.

This game provides these tropes:

Jack says some pretty suspicious things to tell the group is in the Fireworks Union, but the guard doesn't notice.

Example of:
Most Definitely Not a Villain

Jack says some pretty suspicious things to tell the group is in the Fireworks Union, but the guard doesn't notice.