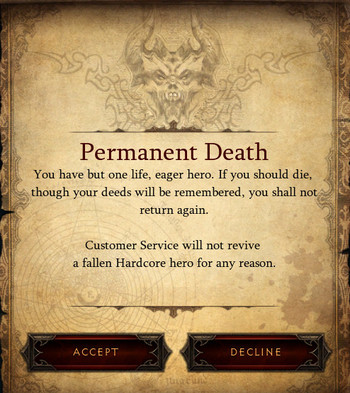 Just remember... there are no continues, my friend.
Game Over!
(Spectate world)
(Title screen)
— Minecraft, after dying in Hardcore mode.
Advertisement:

Harder Than Hard isn't hard enough for some people when Death Is a Slap on the Wrist. Choose Final Death Mode as a difficulty level and that's no longer a problem. When activated, your game will be permanently over if you die. You only get one life, and continuing is impossible; so be extremely careful.

If you want to play again, you have to restart from the very beginning. Be grateful it's optional.

Final Death Mode usually (but not always) comes with protection against Save Scumming. If nothing else, there's the fact that it defeats the purpose of the option in the first place.

Sometimes, players play a Self-Imposed Challenge as if they only had one life; that's a No Death Run.

This may also be known under the terms "Hardcore Mode" or "Ironman".

Often considered a trait of Nintendo Hard. Sub-Trope of Checkpoint Starvation. Related to Permadeath, which is when non-Player Characters only have one life, or when this is the regular game state instead of just a mode. For specific conditions that can cause permadeath, even if you didn't sign up for it, see Deletion as Punishment.