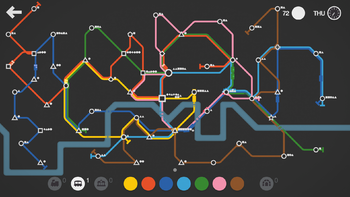 I'm pretty sure this is what the tube looks like. Really.note Also, damn those circle stations!
Mini Metro is a strategy and simulation game of sorts published and developed by Dinosaur Polo Club, initially released on PC via Steam on November 6, 2015, and later ported to iOS and Android.
Advertisement:

The game has you designing a metro system on the fly, drawing lines to connect stations so that you can transport passengers to their destinations; passengers are represented by shapes and need to be transported to destination stations corresponding to their shapes.

But it's not as easy as it sounds. As the map slowly zooms out to expand the available playing area, stations pop up every now and then so you have to modify your lines to reach those stations or draw new ones. You'll need bridges and tunnels to take your trains across rivers, so that your metro isn't a bunch of inefficient disconnected branches. And stations can only hold so many passengers at once, so you've got to use your other tools such as carriages and new locomotives to keep up with passenger intake; if any one station stays at capacity for too long, you'll be forced to close down your metro. Which will happen sooner or later.

All but one of the playable cities are based on cities featuring real-world metros, allowing you to try your hand at reproducing (at least in spirit, anyway) the various iconic subways of the world. New cities are occasionally added based on player input

; in November 2020, the game integrated the Mini Metro More mod and added Steam Workshop support and documentation for custom maps, allowing players to recreate any city they'd like.

Playable cities and the systems they are based on, in order of unlock:

Game Over
Overcrowding at this station has forced your metro to close.
497 passengers traveled on your metro over 30 days.