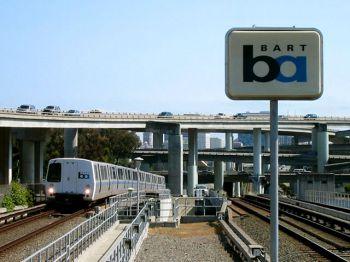 Bay Area Rapid Transit (BART, pronounced like the name of a certain The Simpsons character, not "bee ay arr tee") is the token rapid transit system of the San Francisco Bay Area. While smaller than most metro systems, with only 122 miles of track and 48 stations, it is nonetheless a major staple of the Bay Area's image and a lifeline of daily Bay Area commute... unless you live in the North Bay, the Peninsula, or in the South Bay.

Following a series of studies that indicated the decrepit, privately owned Key System

of streetcars and buses would be insufficient for the Bay Area's growing postwar population, the Bay Area Rapid Transit District was founded in 1957. Work on the first test track segment between Walnut Creek and Concord began in June 1964 (with the opening ceremonies attended by LBJ), construction of the core system (including the Transbay Tube, miles of track under and through downtown San Francisco and several other cities, and a tunnel through the Berkeley Hills) took place over the next eight years, and the system was officially launched in 1972. BART initially opened up for service with one line between the MacArthur station in Oakland and Fremont Station in, well, Fremont. Since then, BART has expanded to cover more of the East Bay, as well as the San Francisco side of the SF Bay via the famous Transbay Tube (which opened in 1974 and runs under the Bay parallel to the SF-Oakland Bay Bridge), parallelling the Interstate 80, Interstate 680 and Interstate 880 commute routes.

Despite the name, not all of the Bay Area is covered by BART:

The reasons for these omissions go back to BART's origins; Santa Clara County declined to join the Bay Area Rapid Transit District at its inception in 1957, instead spending money on a system of expressways. San Mateo County voted to withdraw in December 1961 because it didn't want to lose commerce to San Francisco and felt it was sufficiently served by Southern Pacific's existing Peninsula Commuter Servicenote ironically, the county had to scramble to pay for the trains anyway in the late 1970s when SP petitioned to discontinue the line due to mounting losses, turning it into the Caltrain service.. Only a few months after that, Marin County was forced out due to doubts of its ability to pay for its service and engineering questions about attaching a rail line to the underside of the Golden Gate Bridge. Fortunately, actions have been taken to rectify some of these issues. San Mateo County contributed $200 million to extensions in the East Bay as a "buy-in", and in return between 1996 and 2003 service was extended down to Millbrae and SFO without the county having to officially join BARTD. Construction on a South Bay extension (also funded via a "buy-in" of federal grants and local sales taxes) began in 2012 and was completed in 2018, with the extension reaching out to the Berryessa neighborhood of northeast San Jose. Approval of a second phase of the extension that would continue to downtown San Jose and Santa Clara is currently awaiting additional funds. As for the North Bay...well, SMART

is under development, and there's always the ferry if you just have to get to The City without using the Golden Gate Bridge.

Fare is distance-based, with a few exceptions. A one-way trip will cost anywhere between $1.75 and $10.90. Going through the Transbay Tube, San Mateo County (including Millbrae Station), or entering or exiting at SF Airport will incur additional charges; as an example, going from San Bruno to Millbrae or vice versa (2 stations away) will run you only $2.95, but going from San Bruno to the airport (one less station) will cost you a particularly brutal $7. And before you ask about unlimited-ride passes, no, there aren't any. The closest there is is the San Francisco Muni "A" pass, which allows unlimited rides between San Francisco stations. By default, tickets are provided in the form of resuable paper passes, which you insert into the fare gate on entry and exit; exiting a station with exact fare will capture the ticket. Frequent riders are advised to get the wave-and-pay Clipper cards, which are compatible with other Bay Area transit networks and can be pre-loaded with fare and are eligable for bulk tickets, with purchases of $48 and $64 tickets costing only $45 and $60, respectively. Riding on certain Amtrak lines will allow you to purchase $10 tickets for $8. K-12 students whose schools participate in the BART discount program can get a 50% discount on weekday rides, and children, seniors, and disabled passengers can ride at a 62.5% discount. These are the only fare reliefs you will get, short of working for BART. In short, BART is expensive. (Though usually not so much as trying to park a car in downtown San Francisco.)

Fare is only charged when you exit a station, so transfers come at no extra cost. However, because your fare is not charged until you exit a station, this can result in situations where the fare gates bar you from exiting because you don't have enough fare to leave. Previously, Clipper users could exit the station with a negative fare of up to -$11.25 just fine, but in September 2013, exiting with a negative fare is no longer allowed. For this reason, there are Addfare machines that will allow you to add just enough fare to get out of the system. To prevent people from simply boarding a train, travelling all over the network, and then coming back, a $5.25 excursion fee is applied for exiting the same station you last entered.

For those who do the whole park-and-ride routine, parking is available at select BART stations. Parking is $2.50 for the day if you arrive between 4 AM and 3 PM during weekdays. Otherwise, it's free. You can even park overnight during weekends; even the official website mentions this

Trains run every 15-20 minutes per line. Obviously, frequencies stack if you're at a station served by multiple lines; in San Francisco, which is served by no less than four lines during peak hours, one train every five minutes is fairly common. Some lines will close early or have no service on Saturdays and especially Sundays, necessitating transfers in order to complete the trip. Some stations are built with transfers in mind, having three or four tracks in use; trains at these stations traveling in particular directions will make prolonged stops in order to accomodate transferring passengers.

The stations are often in "have seen better days" status. While they have bathrooms, using them is not recommended; buy something at the nearest Starbucks and use their bathroom instead if you value hygiene. The homeless, as well as musicians of varying quality, are a fairly common sight in the unpaid sections of the station, as well as around the station entrance if the station is underground. Once on the platform, LED signs coupled with automated, robotic-sounding announcements periodically indicate when the next trains will show up, grouped by line. The platform edges have black segments indicating where the doors will be when the train stops, though the trains usually fail to line up accordingly, like a bad Densha de Go! player.

Trains have anywhere between 3-10 cars. The seats are infamous for being filthy and carrying several strains of dangerous bacteria, thanks in no small part to less sanitary passengers; reports of vagrants "using the bathroom" on the train are not unheard of. Thankfully, recent projects have been aimed at replacing these crappy old seats with fresh-looking and easier-to-clean new ones. The car floors are usually made of carpet, but some cars will have composite flooring instead; there are plans to eventually apply this to all cars in the system.

The trains are known for being very noisy, particularly in the subway sections. Bring noise-isolating headphones and music, especially if you're going through the Transbay Tube, which will easily take five minutes to cross.

BART's subways are some of the few in the United States to offer cellphone coverage, so feel free to check your Facebook, send text messages, or browse TV Tropes while riding. Do not expect this same amenity on other subway networks. Notoriously, in 2011, BART temporarily shut down cellphone service to hamper protests following the shooting of Charles Hill, which was not particularly well-received amongst passengers and especially Anonymous.

BART has its own branch of the police. BART Police's reputation has not been particularly positive, especially after the shooting of Oscar Grant in 2009 (the details and discussion of which are best left off of this page) and the aforementioned Charles Hill. In early 2014, for the first time in the system's history a BART police officer was killed in the line of duty when he was accidentally shot by a fellow officer while serving a search warrant.

In 2013, a variety of disputes led to BART workers going on several strikes, with each strike completely shutting down BART service and dealing a huge blow to the Bay Area commute. On the other hand, after the 1989 Loma Prieta earthquake caused a partial collapse of the Bay Bridge, BART continued to run, as it had suffered no damage (having been designed with earthquakes in mind), allowing East Bay commuters to get to their jobs without having to drive. It is still considered BART's finest hour.

"The doors are closing. Please stand clear of the doors."