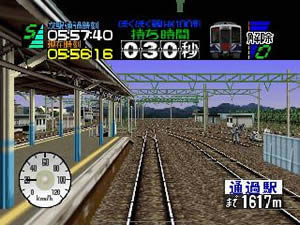 More fun than it looks.
Densha de Go! is a series of arcade style train simulations from Taito that were released in Japan. The games have gained somewhat of a cult following outside Japan, despite none of them ever officially leaving the country. Relatively easy to learn how to play but difficult to master, the game has you in control of one of many trains running in Japan, stopping at stations properly and obeying various signs and signals along the way. Different games have different selections of trains available. The series began in arcades and has been ported to many consoles, including PSX, PS2, PC, N64, and the DS, Wonderswan and PSP.
Advertisement:

So far the Densha De Go games that have been released are:

Tropes present in this game series :