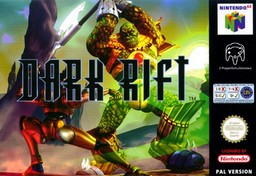 Dark Rift (Space Dynamites in Japan) is a 1997 3D Fighting Game for the Nintendo 64, notable for being the first N64 game to run in 60 FPS, as well as being N64's first native fighting game. It is also unusual among fighting games in that fights go for a default three-out-of-five rounds, as opposed to the more conventional two-out-of-three.
Advertisement:

It was originally conceived as Criticom II, and is the second of three fighting games developed by Kronos Digital, falling between Criticom and Cardinal Syn. These three games have been referred to as the "Trilogy of Terror", due to their rather uniform low-standing with critics.

The crystal (the acquisition of which is the main motivation of the characters of Criticom) turns out to be the Core Prime Element of a Master Key, one which holds the power to all the secrets in the universe. The Master Key was found eons ago lodged in a spatial tear. When it was retrieved it burst into three pieces, sending two pieces into alternate dimensions, and widening the tear into the game's namesake Dark Rift.

According to legend, when the universe was created, a Master Key was forged to lock away all ancient secrets and the infinite power of the cosmos. The key was divided and cast into different circles of reality. When the Hyperions accidentally acquired a piece of the Master Key, then called Core Prime Element, they abuse its power and proclaimed themselves the Chosen Ones. After many years of tyrannical rule, their society became morally destitute and internally corrupted. In the midst of political and social chaos, Sonork Nezom arose as the Chosen Ones´s demented Emperor. With the help of his sordid followers, Sonork enslaved the mass populace, murdered any possible oppositor, and claimed the Core Prime Element as his own. For many years, only one entity sought the prize with vigilant fervor, Demitron, The Lord Demon of the Dark Dimension. When Nezom came into the power, Demitron knew his chance had come. To retrieve the Core Prime Element and murder Sonork, Demitron sent his most hideous servant, Demonica Gkroux. When the archdemon Demonica failed, she exchanged secret information for her life. She told Sonork that, aside from his Core Prime Element, there were at least two more pieces of the Master Key. Demonica also revealed that while the Light Prime Element´s location had never been discovered, the Dark Prime Element was embedded in her lord master´s head. Then Sonork convoked a tournament to force the Light Prime Element´s owner to show himself. With the Core and Light Prime Elements, Sonork has no problem to challenge the dangerous Demitron, cut off his head to obtain the Dark Prime Element and proclaim himself the Emperor of the Universe....