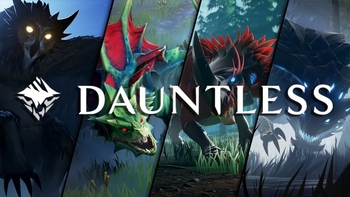 Dauntless is a free-to-play multiplayer Action RPG monster-hunting video game by Phoenix Labs. The game tasks players with protecting the humans living in the Shattered Isles, a fantastical world made up of countless Floating Continents due to an ancient world-shattering catastrophe, from Aether-devouring giant beasts called Behemoths.

Dauntless is a shining example of skill-based Difficult, but Awesome gameplay, in keeping with its monster-hunting genre. Every Behemoth has a wide arsenal of heavy-hitting but subtly (or not-so-subtly) telegraphed attacks, and players will need to learn to recognize those subtle cues and dodge the attacks before they happen if they are to survive a Behemoth encounter. Once a Behemoth has been slain, it will drop its assorted body parts which can be used to craft new and improved armor and weapons.

If this all sounds familiar, chances are you've played or heard of this game's main source of inspiration, Monster Hunter.

After an extended Early Access period, during which the game launched on PlayStation 4, Xbox One, and PC via the Epic Games Store on May 21, 2019, Dauntless entered 1.0 on September 26th of the same year, with a Nintendo Switch port arriving on December 10th. All versions of the game so far support crossplay, meaning you can play with other Slayers who are playing the game on another console. Your progress also carries over across versions.