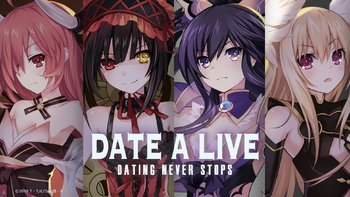 Date or die?
Make your choice now!
"Date A Live: Spirit Pledge is an innovative action/dating sim game based on the popular light novel series Date A Live and officially licensed by [Kadokawa Shoten]. It offers a fresh take on romantic visual novel formula by fusing various simulation elements to enhance the immersion of this mobile DAL world. In this game, you can control or interact with various Spirits in battle and story stages, and form strong bond and connection with them."
— Itunes and Google Play pages.
Advertisement:

Based on the Light Novels by Tachibana Koushi, Date A Live: Spirit Pledge is a mobile game made in China by Hot Game Studios and Moonwalk Interactive Hong Kong Ltd. for the IOS and Android. It was first released in 2018 and is now available to the USA.