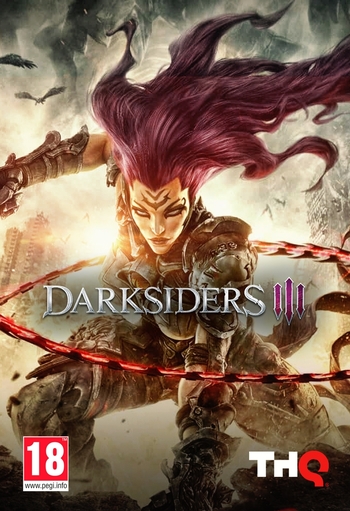 Famine is probably the biggest cock of them all ... He's like Arn Anderson in the sense that he's the craftiest and most diabolical of the Horsemen.
— Badass of the Week, describing Fury (as Famine)

Darksiders III is an Action RPG video game and Sequel to Darksiders II, developed by Gunfire Games and published by THQ Nordic. The former is composed of staff who worked on the previous Darksiders video games as the now-defunct studio Vigil Games. The game was released on November 27, 2018 on the Sony PlayStation 4, Microsoft Xbox One and PC. A port for the Nintendo Switch will be released on September 30, 2021 that includes the post-release Downloadable Content.

Darksiders III occurs at around the same time as the events of Darksiders II. Ditching the elements from the previous two games to pursue the formula from the Dark Souls series by FROMSoftware, players control Fury, the sole female Horseman of the Apocalypse, charged with a quest by the Charred Council to capture the Seven Deadly Sins. Unlike its predecessors, Darksiders III doesn't feature a variety of unlockable moves, nor does Fury ride a mount in the game; instead, the leveling system allows players only to upgrade physical damage, Hit Points or arcane damage. The environment is explorable and interconnected, but exploration only rewards players with souls (functioning as both currency and Experience Points) or materials to upgrade Fury's weapons.

The game was followed up by Darksiders Genesis in December 2019.