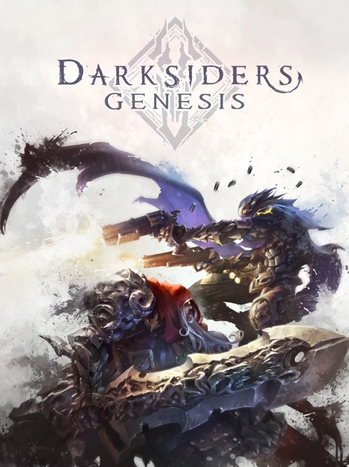 Darksiders Genesis is an Action RPG developed by Airship Syndicate and published by THQ Nordic. It was released on December 5, 2019 for PC and Google Stadia, while Microsoft Xbox One, Sony PlayStation 4 and Nintendo Switch received their respective versions on February 14, 2020. Serving as a Prequel Spin-Off to the Darksiders series, Genesis features Strife and War, two of the four Horsemen of the Apocalypse, as playable characters in either a single- or Co-Op Multiplayer capacity. It is the first Darksiders game not to receive an M rating from the ESRB, instead being rated T for Teen.
Advertisement:

Following the genocide of the Nephilim, The Charred Council sends Strife and War on a new mission to destroy various demon masters who have pledged themselves to Lucifer, as The Dark Prince intends to upset the Balance Between Good and Evil. The Horsemen duo must hunt these masters down, while gathering new information about a conspiracy brewing that may jeopardize The Council, who have been left in charge of creation.