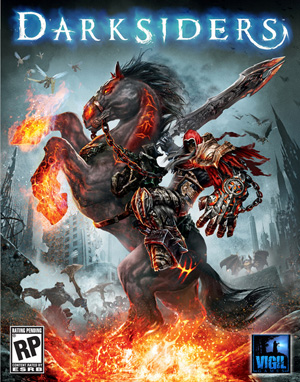 The Horseman cometh; And. Heads. Will. Roll.
He's the biggest, most totally ripped barbarian to ever exist and he has a ten foot long sword which he uses to decapitate fools.
— Badass of the Week, describing War

years before the game came out.
Advertisement:

An Action-Adventure game from Vigil Games and published by THQ, Darksiders (originally Darksiders: Wrath of War; the subtitle was dropped before the game was released) is the first game in the Darksiders series, and puts you in the role of War, one of the Horsemen of the Apocalypse. When the Creator gave the land of Eden to Man, the outcast Nephilim were outraged and fought the archangels. Only four Nephilim survived: Fury, Strife, Death and War. The Charred Council made them its agents charged with maintaining the Balance Between Good and Evil: the Four Horsemen. A truce was brokered between the Kingdoms of Heaven and Hell: the Seven Seals were created to be broken when the Kingdom of Man was ready, sparking the End War where the Four Horsemen would ride across Earth, restore the balance and forge the pact anew.

Skip ahead to the present day, where the Earth is being pelted by a meteor storm...only it's not meteors, but demons. The angelic Hellguard arrive to fight them and War appears in the middle of the battle. But the other Horsemen are not there and the archangel Abaddon, leader of the Hellguard, states that neither should War since the seals weren't broken. An incredibly powerful demon appears, kills Abaddon and nearly kills the Horseman. Hauled before the Charred Council, War stands accused of starting the End War early and siding with Hell. War claims he was only answering the summons of the Seals, but they are still intact. In lieu of being executed for violating the balance, the Council agrees to send War on a Roaring Rampage of Revenge to hunt down those responsible, be they from Heaven or Hell.

Tropes regarding the first Darksiders game are: