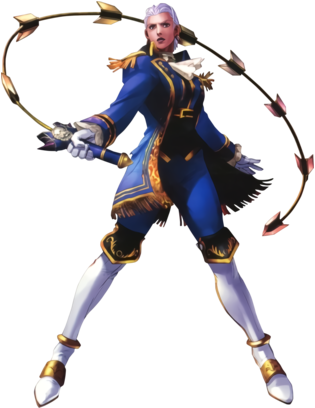 What's better than a whip or a sword? A whip sword, of course! They have the flexibility and long reach of a whip and the cutting power of a sword, meaning that all sorts of fancy tricks can be done with them while cutting people to pieces. Most fictional examples are made from separate sword segments threaded through with the whip, which can expand and contract on command, usually with the press of a button on the sword handle (though this is rarely shown). Some can even separate the segments completely and attack with them, and then have them return and form the sword again. How they do this is almost never explained, not even with "magic".

This type of weapon often falls squarely into Awesome, but Impractical, where you'd need a pretty impressive engineering setup to create a mechanism and spring capable of holding the sword in sword-form without violating basic structural integrity and capable of sending it out as a whip. As of yet, no one's managed to make a working model of such a weapon in Real Life (though some come close in principle), but fiction usually Hand Waves any structural issues through magic, or electromagnets. The closest practical Real Life equivalents, like the chain whip

usually lack the cutting power of a sword or the reach of a whip.

But then again, making a whip sword is only half the battle, since you would need extensive training to actually use it or else you'd be more likely to hurt yourself than anything you're trying to hit. This is not impossible in real life, as demonstrated by the use of the Urumi weapon by the Indian Rajputs, but will likely speak more of the extreme skill of the wielder than any inherent practicality.

A downplayed, more plausible (but still Awesome, but Impractical) version of this is a normal sword/knife tied to a rope or chain, like the Chinese rope dart (but sharper). It avoids the "cutting whip" problem, and it's easier to make, but then controlling it to actually hit enemies is another matter.

But hey, you have to admit they look cool, hence this is a Sub-Trope of Impossibly Cool Weapon.