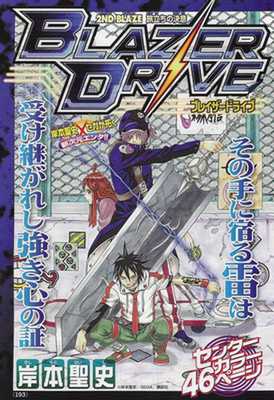 Sticking it to 'em...in more ways than one.
Advertisement:

Set in a futuristic Tokyo, mankind has managed to overcome pollution doing so with the help of Mystickers, stickers that when traced can activate the element they represent. These stickers are mostly used as natural power sources for everyday things, like heating a stove or powering automobiles. Using them on yourself, however, is highly dangerous...unless you're a Blazer - a person that can put Mystickers on themselves without harm and wield their power.

One such Blazer is Daichi, a teenager living with his older brother, Ginga, after their parents died in an auto accident. His life was pretty uneventful (save for being part of a small gang) until one day he helps save a man being chased by a gang of thugs. However the leader of said gang manages to find Daichi and in the ensuing fight reveals that his brother is actually part of a secret force known as Guardians, who protect the city from a evil group known as Qilin Realm who seek to use mystickers for destructive means.

Ginga unfortunately ends up getting transported to another dimension while protecting Daichi, but manages to leave Daichi a Mysticker that can endlessly generate electricity. Soon Daichi meets Kuroki, a friend of Ginga and the aforementioned man who was being chased, who offers to show him the world of the Blazers - and thus, Daichi's adventure begins from there.

The second mainstream manga of Seishi Kishimoto, creator of O-Parts Hunter, which was serialized in Monthly Shonen Rival from 2008 to 2010. It was made in conjunction with Sega who made a RPG for the Nintendo DS which features a story that runs parallel to the main manga (what's more, this was announced before the series was even serialized).

The Manga provides the following examples of: