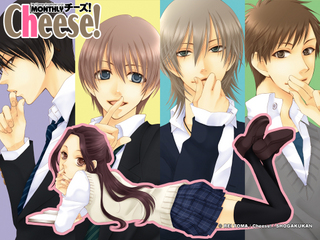 "I'll never forget that kiss for as long as I live."
—Meiko Kitazono
Advertisement:

Boku wa Kisu de Uso wo Tsuku is a Shōjo manga series by Rei Toma. It was published in Cheese! magazine from April 24 to October 24 2008, then later compiled in 2 volumes along with other three one-shot stories by the author.

Meiko Kitazono is a second year high school student who spends her time in the library every day, where she enjoys reading novels—specifically, mystery novels. During one visit after school, Meiko falls asleep and is awakened by a kiss.

However, Meiko is uncertain on who exactly kissed her, as she wakes up to find the culprit missing, but there were four guys that were inside the library on that same day—popular Shinoda Shinobu, cool Kyoichiro Mikoshiba, the dogged nice guy Shota Mogami, and Token Mini-Moe underclassman Shinichi Hachiya.

Who is Meiko's secret admirer?