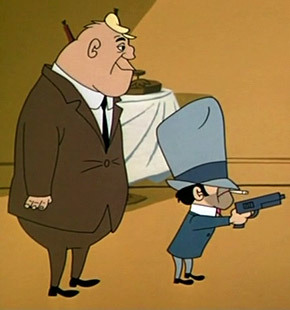 "Don't mess up again, ya lunkhead."
"Duhhh, okay Rocky!"
"The little one is called Master. He's the brains. He runs Underworld. The other one is Blaster. He's the muscle. Together they can be very powerful."
— Mad Max: Beyond Thunderdome
Advertisement:

A classic, almost timeless, character pairing, among The Oldest Ones in the Book.

Two guys who are often Heterosexual Life-Partners, and usually embody the Fat and Skinny trope. That's just the start of the bundle of tropes these two embody.

This trope describes a pair of guys who always fight together, are best friends forever, and quite often have a very obvious hierarchy: The little guy is often in charge — unless, of course, he's a "Mini-Me" to the big guy. The big guy plays the Dumb Muscle role, but there's a catch, and this is important—oftentimes, the big guy will have some pretty good ideas. The little guy often ignores the big guy's suggestion, only to come up with the idea himself just a split second later, as with Timon and Pumbaa of The Lion King (1994) fame. Even if he's not obfuscating, meaning he really is just a big dumb lug with occasional brainstorms and he often doesn't know his own strength, the big guy has many a flash of insight.

The little guy is usually listed first, since he's the leader, and they are always listed together, as if they are one entity. In fact, some episodes may center on the fact that they can't live without each other. Although these guys are seen most often in kid's shows, they are also played seriously.

If this is a case of Brains and Brawn, the Big Guy is usually the Brawn, and the Little Guy the Brains. It's almost never the other way around, but in some cases the Big Guy can be rather smart too.

Almost always a case of Smart Jerk and Nice Moron as well. See also Those Two Guys, Huge Guy, Tiny Girl, and Tiny Guy, Huge Girl. Super-Trope for Little Guy, Big Buddy, where the bigger of the two protects/looks after the smaller, and Bully and Wimp Pairing, where the bigger one bullies and manhandles the shorter one. Add a skinny guy and you've achieved a Big, Thin, Short Trio.