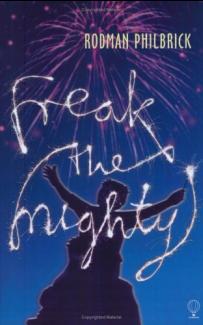 "I never had a brain until Freak came along and let me borrow his for awhile, and that's the truth, the whole truth. The unvanquished truth, is how Freak would say it, and for a long time it was him who did the talking."
— Max Kane
Advertisement:

Freak the Mighty is a 1993 young adult novel by Rodman Philbrick. The story is narrated by Maxwell Kane, a large boy who is self-described as stupid. He describes the time when he met and became friends with another boy named Freak. The two first briefly meet in daycare, where Freak is shown having to wear braces on his legs and uses crutches to walk. Skipping ahead a few years, Max is about to enter the eighth grade when Freak moves into a house on the same street. After going to Fourth of July fireworks together, where Max is able to save Freak from getting beaten up by a bully and his gang, the two become best friends. They are both able to help each other, with Max protecting Freak and Freak teaching him how to read, and end up going on several adventures together.

In 1998, a sequel, Max the Mighty, was released, which takes place after Freak the Mighty's events. That same year, a film adaptation, The Mighty, starring Elden Henson as Max and Kieran Culkin as Freak, was released, despite having taken a number of creative differences from the book.

For more by Philbrick, see The Last Book in the Universe.

Freak the Mighty provides examples of: