You Have to Burn the Web 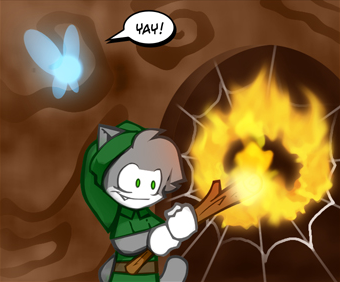 A victory for pyromaniac urges.
If anyone happens to use a source of ignition in a Cobweb Jungle, you'll have an inferno in seconds.
Advertisement:

A bit of Artistic License – Arachnids — spider silk does shrivel quite rapidly when exposed to intense heat (so yes, a flamethrower can clear out cobwebs), but it doesn't actually burn, much less cause the pyrotechnics that people have come to expect in fiction. On the other hand, the dust that collects on old cobwebs usually is flammable, so sometimes those dusty old cobwebs really are as burnable as fiction makes them appear. But in fiction, even clean, freshly spun spider silk can (and usually will) go up in flames.

Sub-Trope of Made of Incendium. Not to be confused with the rise of the World Wide Web breaking the premise of a story. Nor with someone needing to destroy said World Wide Web.

This trope likely originates from the fact that in old movies, cobwebs were typically made from cotton and would burn quite handily if set to an open flame. Hollywood writers/directors apparently didn't realize that real webs do not work that way.

The trope name is a reference to You Have to Burn the Rope, a Flash game which is otherwise completely unrelated to this trope as it contains no webs at all, much less ones that can be burned.

Webs can be burned in Luigi's Mansion 3

Webs can be burned in Luigi's Mansion 3