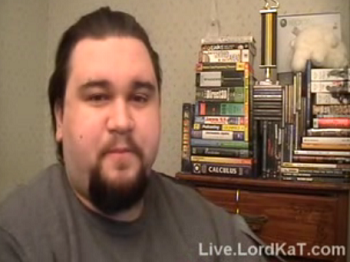 "You're gonna die. A lot."
Advertisement:

Jason "LordKaT" Pullara, is a citizen of New York City who has been online forever. It is believed that he is one of the four Internet gods.

He is the creator and owner of LordKaT.com

, hosting content produced since his days of making videos for That Guy with the Glasses (even before joining the crew). His primary contribution to the site was Until We Win

, where he gave tips on how to beat legendarily difficult video games like Battletoads without cheating. In early 2011 Jason ended UWW and announced that he was leaving TGWTG, both for the same reasons (to work full time with his JustinTV livestream and because scripting and filming were always his least favorite parts of the creative process). He later revived UWW on his YouTube channel with a dedicated editor for the series.

Jason used to live-cast on a stream called "LordKaT Live!

" This livestream brought together numerous personalities from TGWTG, along with some of his best friends both from inside and outside the IRC chat. As he's gained new viewership via promotions such as the stream, so as he did for the others who visited the stream; several more stream hosters popped up as a response to this, including JewWario, Sean Fausz, JesuOtaku, and Obscurus Lupa. Especially popular were the Dungeons & Dragons sessions: Spoony's Campaign was played on the stream as is one with Lordkat as DM. In addition, the Eriadne Campaign has joined the stream, with AionoftheBlades as DM.

As of 2019, LordKat is no longer broadcasting, and much of his stream-related content has been removed from the internet.

Some of the shows on LordKat's livestream have included: