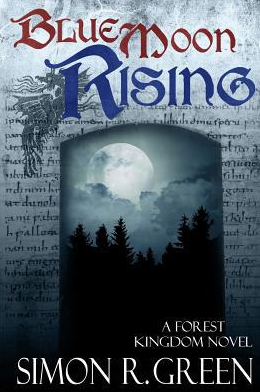 Forest Kingdom is a novel series by Simon R. Green, beginning with Blue Moon Rising, which follows the exploits of Prince Rupert of the Forest Kingdom, Princess Julia of Hillsdown, his unicorn, and her dragon. And The High Warlock.
Advertisement:

Its premise: the Forest Kingdom has always had Heroes. Kings with mighty swords of legend, princes who slew dragons by the thousands, champions and knights galore. As well as the occasional mage.

Prince Rupert is not one of them.

He is in fact, the second, unwanted, less skilled, less charming, politically inept, son of King John, and a possible danger to the kingdom and throne due to be inherited by his brother Prince Harald. John thus deems it necessary for Rupert to die, and sends him off on a perfectly reasonable quest to slay a dragon and bring back its hoard — for the Forest Kingdom's Royal Treasury is a little... thin.

Then things get hairy when the Darkwood starts stirring again, and signs point to its creator and their old enemy, the Demon Prince, having returned.

The main series consists of five books; books 1, 4 and 5 center around Prince Rupert and Princess Julia, while books 2 and 3 follow other characters in the bordering kingdoms:

The six-book Hawk & Fisher series (released from 1990-1992 and reissued in the three-book omnibus editions The Swords of Haven and The Guards of Haven in 1999) is set in the Low Kingdoms, on the same continent and in the same universe as the Forest Kingdom, but shifts focus to the southern half of the continent and its port city of Haven, where the titular characters now serve as Captains of the City Guard. It consists of:

The Forest Kingdom novel Beyond the Blue Moon, set after the sixth Hawk & Fisher book, reveals that the titular Captains are actually Prince Rupert and Princess Julia from Blue Moon Rising under aliases, having moved to Haven after the events of that book. When a face from their past informs Rupert that his homeland is danger, he and Julia must return to the Forest Kingdom as Hawk and Fisher to protect it one more time.

Once in a Blue Moon, serving as a conclusion to the overall series storyline, sees the couple once again in action, this time facing an old enemy.

Tropes found in Blood and Honor:

Forest Kingdom #3: Down Among the Dead Men

Tropes found in Down Among the Dead Men:

Hawk and Fisher — in general

Tropes found in multiple books of the Hawk and Fisher series:

Tropes found in Beyond the Blue Moon:

Forest Kingdom #5: Once in a Blue Moon

Tropes found in Once in a Blue Moon: