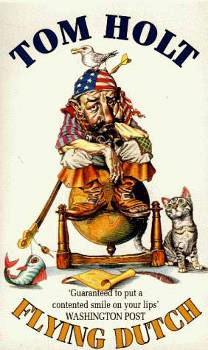 Flying Dutch is a comic fantasy novel by Tom Holt, very loosely based on the legend of the Flying Dutchman. Richard Wagner got it all wrong!

Captain Vanderdecker was an ordinary 16th century ship's captain until an accident involving an alchemist on the run from the Inquisition, and a mishandled magic potion, left him and his crew immortal, indestructible, and incredibly stinky! Not just unwashed-sailor stinky. This was a stench that could make rotting corpses mixed with diarrhea seem like a breath of fresh air. Unfit for human company, Vanderdecker and his crew set out to sea. Fortunately, every seven years, the stench vanishes for about a month, allowing them to land and restock. Then it returns, and it's off to sea once more. It's a boring life, but what are you going to do?

What Vanderdecker doesn't know is that the life insurance policy he took out when he was young pays fifty percent compound interest for every year he lives past seventy-five. It was a sucker bet at the time—sailors notoriously die young—but now Vanderdecker's heir, whoever that may be, will own more money than there is in the world if he dies.

Jane Doland is a clerk who works for the Lombard Bank. A bank that happens to be owned by a very old insurance company. Jane is an ordinary young woman with a ordinary, boring job. There's just one thing about her: she has absolutely no sense of smell. When this little fact comes to the attention of her superiors, Jane suddenly find herself with a very unusual, and very secret assignment: contact Captain Vanderdecker, and make a deal with him, before the economy of the entire world is destroyed!