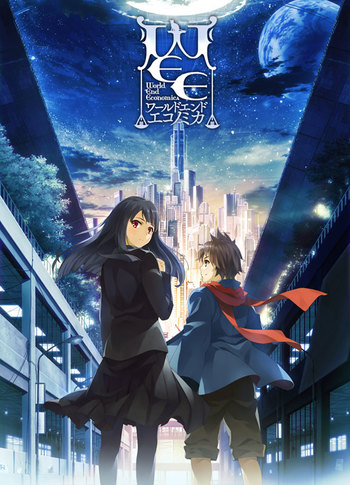 The story takes place in the far future, sixteen years after humanity has colonized the Moon. As Earth fell victim to pollution and poverty, the Moon grew to become an economic paradise, in which anyone can supposedly make it big. In this environment, only the more adept can prosper ; people's desires are either granted to them, or crushed mercilessly. As such, only two rules matter. The first is to never take a loss. The second is to never forget the first.

The main protagonist, a boy named Yoshiharu (Haru for short), has a wild dream, for which he needs to collect an insane amount of wealth. He runs away from home, and starts playing the stock market in order to gain the money he needs, proving to be extremely competent at it. As he attempts to escape the authorities, he is taken in by a young religious woman named Lisa. He also meets another young girl that was also taken in by Lisa, named Hagana ; she is cold, abrasive, lacks social skills entirely, and seems to be interested only in mathematics, a field in which her skills reach genius-levels of mastery, and in helping Lisa however she can.

The story revolves heavily around the themes of economy, wealth, and the social ladder, and provides a lot of commentary on both how it serves as a mean to achieve one's dreams and ambition and how it is a cruel world that can destroy one's life in an instant. Explanations about various aspects of stock trading are frequent within the story; these explanations are incorporated in a manner that makes them relevant to the events at hand and easily understandable for neophytes.

The three chapters were originally released for Windows on August 2011, 2012 an 2013 respectively. The first episode was then ported to the Ren'Py engine in May 2014, and released on Steam along with an English translation, with the help of publisher Sekai Project. Following its success, a Kickstarter campaign was launched in order to localize and port the remaining two episodes. The Kickstarter reached its goal in a mere 44 hours, and the final amount collected was four times higher than the initial goal, allowing for an HD makeover of all three episode and a port to iOS and Play Station Vita under the Unity engine. The second chapter was released on Steam in July 2015 and the third in December 2016. The first episode was also released on the Japanese Nintendo 3DS eShop in July 2016.