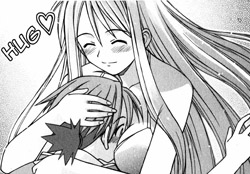 And now Negi wants a cookie.
"Hey-wai-don't touch me! DON'T HUG ME! I'm not a doll, you know! I can't breathe- *mggggfffh*"
— Raspberyl getting picked up by Sapphire, Disgaea 3: Absence of Justice
Advertisement:

One Head Taller, with a few inches on top (and quite a few more in front).

Usually found in anime or manga: a usually short, usually male character becomes smooshed in the chest area of a taller female character. They get a cleavage cushion. A push-up pillow. A rack resting place. A maternal muffler, you get the picture...

If she's Hot For Student, she may use this as an initial seduction tactic, but most of the time, the hugger is unaware of (or unable to seenote and to be fair, it can be hard to see much of anything in this position) the implications of the situation. This is often done for pure Fanservice value, but may also be used for comedy in one (or both) of two ways:

Because of that last one, this is sometimes initiated from behind the victim instead, allowing both him to breathe and the audience to see his reaction better.

While this trope is almost Always Female, there does exist a male variant where the Hunk draws someone into their pecs a tad too forcefully.

The name comes from a scene in Negima! Magister Negi Magi, where poor Negi nearly gets drowned when several girls do this to him at once while he was partly submerged. Poor, lucky bastard. On occasion, this can overlap I Have Boobs, You Must Obey!.

See also Funbag Airbag and Thanks for the Mammary for accidental collisions of the type. Not to be confused with Marshmallow Dream. (However, it's only a matter of time before they're mixed into one trope.) Compare Cry into Chest and Cooldown Hug. Contrast Torpedo Tits, where the individual is deliberately attacking with breast-mounted weaponry.

As a reward of delivering milk, Cremia picks up young Link for a hug.

As a reward of delivering milk, Cremia picks up young Link for a hug.