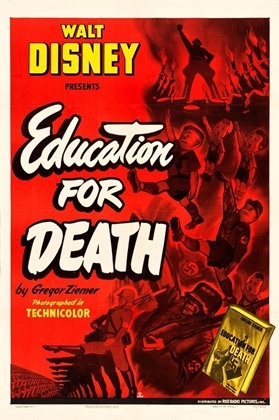 The Making of a Nazi
"What makes a Nazi? How does he get that way? Well, let's look into the process..."
Advertisement:

Education for Death: The Making of a Nazi is a Wartime Cartoon in the Classic Disney Shorts lineup, based on the Gregor Ziemer book of the same name and released on January 15, 1943. High production values aside, suffice it to say this is not your typical Disney cartoon — aside from some brief bits of comedy (particularly the retelling of Sleeping Beauty as an allegory of how Adolf Hitler "saved" Germany from democracy), this short was intended as a dead-serious message for American audiences, displaying just what destructive and terrifying methods the Nazis used to brainwash young Germans into becoming perfect soldiers for the Führer. Hence, the title.

The short is included on the DVD set "Walt Disney Treasures: On The Front Lines", uncut and uncensored and with a message from Leonard Maltin explaining the short and how horrific and chilling it truly is.