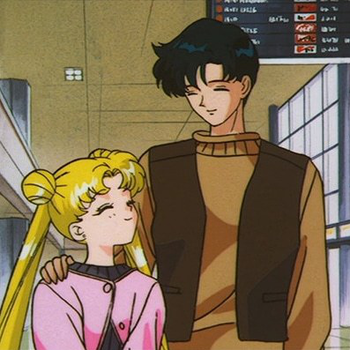 Men are generally half a head taller than women in Real Life; in fiction, it's practically codified that every couple will have the man One Head Taller than the woman. If this is reversed, expect seeing Marshmallow Hells and Funbag Airbags. Taking this to extremes gives you Huge Guy, Tiny Girl and Tiny Guy, Huge Girl. As transplanting traditional gender roles into same-sex couples is popular in fanfiction, the character who could be considered "dominant" (often more serious or reserved) in the relationship is often similarly taller than their significant other. (A noticeable exception is the phenomenon of aggressive and dominant Tsunderes being shorter than their partners. On the other hand, the act of cuddling is designed to show off their cute side.) Either way, being One Head Taller naturally allows you to tuck someone under your chin when surprising them with a hug. This rarely works the other way around, although the "cutesy" partner being taller is usually a deliberate humorous device for the audience to notice. In that case, the grouchier counterpart is hugged the way one would a puppy. Usually, if the shorter partner is doing the hugging from behind, the arms will come around at about elbow-height, and the hugger will either rest their cheek against the huggee's back, or tuck their chin around an arm.

With some skill, this trope can give the illusion of characters being much older (or younger) than they actually are. On the other hand, if one wants to disguise a huge difference, expect a Scully Box to be used.

This is an extremely pervasive trope in Boys' Love works, to the point where shippers drawing doujinshi will occasionally modify the heights of characters to make the taller Seme/shorter Uke stereotype work. An Onee-sama is also very likely to be taller than her relevant object of attention. Bara however, usually has the Seme "shorter and cute" while Uke "tall and handsome" instead.

Expect the taller person to mock the shorter one for their shortness most of the time.

Fun fact: On Tumblr, this trope is known as "tol and smol".

The current (as of 2020) Top Gear UK presenters also exhibit this trope—Chris Harris is a hair over 5'7", while Freddie Flintoff is 6'4". Paddy McGuinness is in the middle at 6'1".