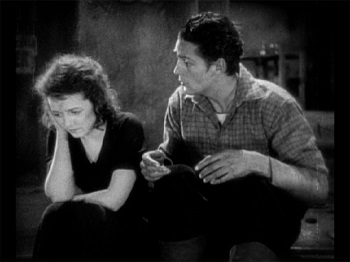 Diane (Gaynor) is a prostitute in 1914 Paris. She is The Woobie incarnate, victimized and beaten by her horrible older sister Nana, who is addicted to absinthe (unclear in the movie, specified in the play

). One night Nana really loses it, chasing Diane out into the street, lashing her with a whip, and attempting to strangle her after Diane collapses. Diane is saved by Chico (Farrell), a worker in the Paris sewers, who sees the unfolding scene while on his lunch break and chases Nana off.

No sooner has Chico saved Diane's life when he has to save her life again, as Diane grabs a knife and nearly kills herself. And right after that happens, a policeman on a sweep targeting streetwalkers is about to take poor Diane to jail. To save her a night behind bars, Chico impusively says that she's his wife. The policeman says that a detective will be checking on that later, and Chico thinks he's screwed until Diane suggests that she live with him and pretend to be his wife until the cops come by to follow up. Diane moves in to his apartment, and not surprisingly, they fall in love...but World War I drives the lovers apart again.

This lyrical, heartfelt romance still stands up as an example of the artistic peaks silent films were hitting in the days before the talkie revolution killed them forever. At the first Academy Award ceremony it lost the Best Production (later renamed Best Picture) award to Wings but won Oscars for Best Adapted Screenplay and "Best Direction, Dramatic Picture" (starting with the next ceremony, the directing awards for dramatic and comedy pictures were merged into a single Best Director award). It also won an Oscar for Best Actress—sort of. At that ceremony the acting awards were given for one's whole body of work in a year, so in addition to this picture, Gaynor won for Street Angel and the all-time classic Sunrise.

Gaynor and Farrell had such chemistry together that Fox Studios wound up pairing them in twelve films. 7th Heaven was remade ten years later, with the title spelled out as Seventh Heaven, and with an up-and-coming James Stewart playing Chico. This film is preserved in the National Film Registry.

Not to be confused with the TV show.