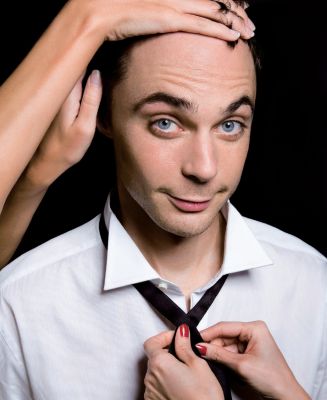 "I'm just glad I found what I should be doing. We all know people who struggle to find what's right for them. At the risk of sounding like I'm on Oprah, I think the answer is within."
— Jim Parsons, on his decision to become an actor
Advertisement:

Born March 24, 1973 in Houston, Texas, James Joseph Parsons began his acting career on the stage of the University of Houston, where he was a founding member of a theater troupe known as Infernal Bridegroom Productions. By the time he had earned his master's degree in Fine Arts at the University of San Diego, his list of theater credits was staggering — Endgame, What Happened Was, Guys and Dolls, and The Balcony are only a few he appeared in. Parsons toiled for a few years after moving to Hollywood, getting small parts in commercials (Fed Ex, Quiznos, Stride gum, etc.), TV shows (Judging Amy, Ed) movies (Garden State, School For Scoundrels), and three axed TV pilots for the FOX network.

Then, sometime in 2006, Parsons stumbled upon a character named Sheldon Cooper. Sheldon wasn't a resident of FOX — he was going to be a supporting character on a new CBS sitcom called The Big Bang Theory. He was supposedly a post-doc string theorist with an astronomical IQ and an ego to match. Parsons auditioned for the part — and so blew series creator Chuck Lorre away that he asked him back for a second audition to make sure it wasn't a fluke.

Today, Parsons has earned critical acclaim and four consecutive Best Comedy Actor Emmy nominations; he won for the second and the third time. He has also made fans on a global scale for his portrayal of Sheldon, and his performance has been praised as the main reason for The Big Bang Theory's success.

A few other things you should know about Jim Parsons: