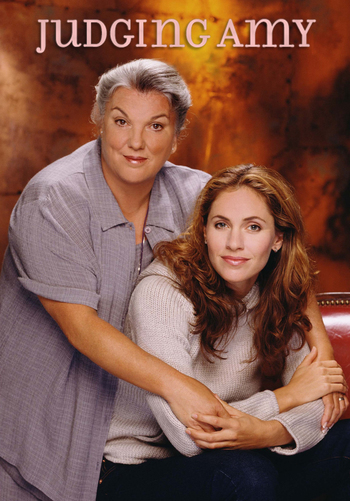 Judging Amy is an American legal drama television series that aired for six seasons (1999–2005) on CBS.

After her divorce, attorney Amy Gray (Amy Brenneman) and her young daughter move back into her mother's house in Hartford, Connecticut, and Amy becomes a family court judge. Amy's mother Maxine (Tyne Daly) is a social worker who holds herself, as well as everyone else — especially Amy — to her perfectionist standards. Since Amy is a family court judge and Maxine is a social worker, they occasionally cross paths professionally, sometimes creating discord that spills over into their personal relationship. Amy and Maxine are both single and interested in romance. Amy's introspective, younger brother Vincent (Dan Futterman) is a writer, while her older brother Peter (Marcus Giamatti), an insurance salesman, and his neurotic wife Gillian (Jessica Tuck) frequently drop by.

This show is about as complex as it gets without being a Mind Screw...

Not to be confused with the 1997 film Chasing Amy.